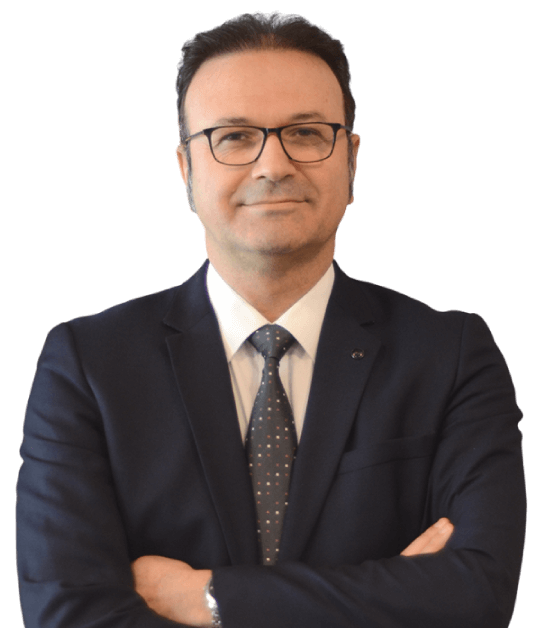 Prof Saim Yilmaz was born in Antalya-Turkey in 1962. After having completed the primary, secondary and high school education in Antalya, he started the Istanbul University Faculty of Medicine in 1979.  Following his graduation from the faculty of medicine in 1985, he worked as a general practitionar for 2 years and a resident of pediatrics for another 2 years in İstanbul. In 1988, he started his residency in Radiology in Akdeniz University School of Medicine, where he became a specialist in 1992, assistant professor in 1994, associate professor in 1988 and professor in 2004.

Since the time he became a radiologist in 1992, Prof Yılmaz has exclusively worked in interventional radiology, which is a subspecialty of radiology dealing with image-guided minimally invasive treatments.  During his career, he visited many prominent interventional radiology centers in USA and Europe, attended more than 100 congresses and symposiums and published more than 70 scientific articles that received over 600 citations. He also made more than 100 scientific presentations in congresses, presented over 50 invited lectures in various meetings and received 7 scientific awards.

In 1988, Prof Yılmaz published an article, which later became the 5th most citated radiology paper in Europe and the 3rd most citated paper in Turkey. Because of this article, he was invited to European Radiology Congresses to present educational courses for 2 successive years. Later, Prof Yilmaz focused his studies primarily on the minimally invasive treatment of peripheral arterial disease. He performed innovative techniques such as “subintimal angioplasty” and “transpopliteal angioplasty” for the first time in Turkey. Following his publications on these techniques in 2001 and 2003, he was invited to the Cardiovascular and Interventional Radiology Congress (CIRSE) to present his experience.

In 2003, Prof Yilmaz performed the “endovenous laser ablation”, an innovative alternative to varicose vein surgery for the first time in Turkey. He also became the first physician in Turkey to perform other new techniques such as “ultrasound guided miniphlebectomy and foam sclerotherapy”, and introduced them to radiologic society. Prof Yilmaz also performed, for the first time in Turkey, two other new techniques, namely femoral block and sciatic block, which provide analgesia during endovenous varicose vein treatments. Prof Yılmaz published many articles and presented many lectures on the nonsurgical endovenous treatment of varicose veins.  One of these articles was selected the best publication of the year, one presentation was selected the second best study and another presentation received the Cum Laude award at the CIRSE Congress.

Since 2005, Prof Yilmaz started to perform intensively uterine fibroid embolization (UFE), which is the nonsurgical alternative to myemectomy and histerectomy in the treatment of uterine myomas and adenomyosis. He wrote several articles and presented many lectures on this minimally invasive treatment. He performed, for the first time in Turkey, the “superior hypogastric nerve block”, for the preventation of pain after UFE, and introduced this technique to the radiological community.

In 2011, Prof Yılmaz, with a group of professors dealing with oncology, established the MIIO (Mediterranean Integrative and Innovative Oncology) group and started to work at the Antalya Memorial&Medstar Hospitals. He focused his studies on tumor ablation (radiofrequency, microwave, nanoknife, cryoablation) and transarterial tumor treatments (chemoembolization, radioembolization etc). Once again, Prof Yilmaz performed for the first time in Turkey, nanoknife ablation for pancreatic cancer and cryoablation for lung, pancreas and soft tissue tumors.  His presentations on nanoknife ablation for pancreatic cancer was selected the best study in radiology and interventional radiology meetings in 2013 and 2014.

Prof Yilmaz speaks English, French and German. He is married and has two children.

“Some thyroid disorders can be treated with simple nonsurgical interventions”